As a result of his victory, Murray was able to improve his chances of toppling Roger Federer as the world number three before the season ends.

The way Murray is playing, it suggests he would have beaten Nadal in the semi-finals of Wimbledon and the US Open had he have showed such form back then, but normal service seemed to be the order of the day when Nadal broke Murray early in the first set.

Murray had won 11 consecutive matches going into the match but two of his three defeats in the last four months had come against Nadal who had also beaten him five times in a row.

Though he was down in the first set but after some adjustments he found the rhythm and began to dominate Nadal from the baseline and move him around, breaking through in the fourth game of the set.

Nadal, looking for a first hard court title since he won this event a year ago, then earned himself three break points at 0-40 but three aces from Murray saw him off and he then broke again to take the set and level the match.

In the third set, Murray seemed to play the best tennis against Nadal and the Spaniard almost conceding that Murray was headed for the victory. 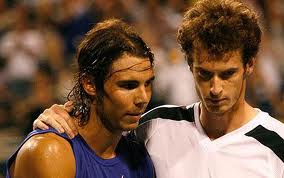