Previous common perception is that eating too much spicy food, acid in one’s system and stress causes gastric ulcers for humans.

However, gastric ulcer is the result from the erosion of the stomach lining by stomach acids and about sixty percent of gastric ulcers are attributed to a bacterium known as Helicobacter spp.

Infection by this bacterium is also attributed as the cause of 90% of all ulcers in the small intestine (duodenal ulcers).

Scientists from the University of Eastern Philippines are determining the presence of such bacterium in animals by testing dogs, cats and swine as experimental samples.

The team led by Dr. Gerry A. Camer, adopted a two step identification process to determine the presence of the microorganism. The preliminary process is the urease test and cytology (the study of the cells).

The final process is the use of bacterial DNA in the polymerase chain reaction to confirm the identity of the bacterium.

Helicobacter produce large amounts of urease enzymes, while mammalian cells do not. The stomach is usually a sterile environment.

The presence of urease in the stomach therefore is an indication of contamination by the bacterium. On the other hand, a study of the gastric mucosa will show the curved, Gram-negative rods of the bacterium against the columnar epithelial cells and mucous.

With positive results from both tests, the identity of the bacterium from the samples was confirmed using the Polymerase Chain Reaction.

The research team then noted that while Helicobacter spp. strain was present, the animals did not show any symptoms.

The team found that the animals had mounted two kinds of immune response: the lymph nodes in the stomach had enlarged (gastric lymphoid follicular hyperplasia) and antibodies had developed against the bacterium (seroconversion).

Differences in the ability of individual bacterial species to cause disease may explain why ulceration and excess of gastrin hormone in the blood (hypergastrinemia) are absent in dogs and cats.

However, the team implied that it is also important to consider the host response to infection, as different animal species react differently to infection with Helicobacter strains.

Dr. Camer pointed out that Helicobacter pylori in humans is acquired by person-to-person spread through the fecal-oral and oral-oral routes and may be waterborne.
However, there has been no reported case of animal to man transmission.

This study is the first to explore the presence of Helicobacter species in selected Philippine animal species. 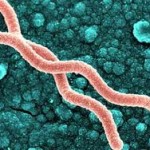 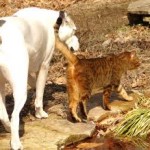