The death of US Ambassador to Libya, Christopher Stevens and three other diplomats in Benghazi, Libya was indeed unfortunate.

The man behind the anti Islamic movie entitled ‘Innocence Of Muslims’ that sparked the trouble was identified by the law enforcement authorities as Nakoula Basseley Nakoula, the film producer.

In 1997, Nakoula had been charged with intent to manufacture methamphetamine. He pleaded guilty and was sentenced to one year in county jail and three years probation.

The Los Angeles County District Attorney’s office said Nakoula violated probation in 2002, and was re-sentenced to another year in county jail.

Nakoula was again charged in 2010, as he was involved in federal bank fraud after being indicted on fake bank accounts created using stolen Social Security numbers. He was given a 21 month prison sentence and had to pay US$ 790,000.

It was not known as to Nakoula’s motive in producing the movie that affects the sensitivity of the issue and who has been blamed for inflaming mobs that attacked U.S. missions in Libya, Egypt and U.S. Embassy in Yemen.

The authorities have still to determine if the motive behind has something to do with the 9/11 anniversary.

To conservative Muslims Nakoula’s mocking and maligning Muslims and Prophet Muhammad (sws) through his film, such act is a direct assault not only to its Islamic culture but towards the religion of Islam itself.

To moderate Muslims, sheer ignorance of the West on Eastern Islamic culture and religion as the culprit. Offensive though, but with liberality they find themselves too forgiving towards the issue.

The West must understand that the conservative Muslims outnumbered the moderates roughly by 7 to 3 in the Islamic world, so they could always expect retaliation from the majority whenever issue of such sensitivity of this kind arises.

It could be the interest for both worlds to know and learn each other’s culture and religion to negate such similar untoward incidents to happen in the future.

If the West and the East compromise to fully understand and respect each other’s culture and religion, there’s no reason why both factions could not co-exist and live harmoniously in peace. 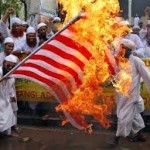