In maintaining a healthy weight we are being told not to take more than 2,000 calories a day.

Sticking to the figure may not be as accurate as it seems because calories work differently in the body depending on which type of food you eat.

Long term weight maintenance, calories count, but the types of foods might matter more, according to a study by Harvard researchers published in the New England Journal of Medicine.

Several studies have thrown open the debate about calories, questioning conventional wisdom about which foods are really making us fat.

Not only are many of the calorie contents listed on food labels and in diet books inaccurate, but the calories from certain foods affect the body in different ways.

A recent study at the University of California strengthen the claim that people who had just 19 more calories a day than usual gained 2 lb. of weight in a year.

Obesity researcher Zoe Harcombe reported that despite the UK National Food Survey confirming that we ended the last century eating 25 percent fewer calories than in the seventies, the obesity rate has increased six-fold since then.

‘It is insane that we ignore these facts and stick resolutely to calorie counting,’ Harcombe says. ‘So how can we be eating fewer calories yet be getting fatter?’

Rick Miller, a clinical dietitian and spokesman for the British Dietetic Association, says: ‘The texture and consistency of a food influences the amount of energy you need to digest it.

‘Soft and highly processed foods require less effort to chew, so you use fewer calories.

High fiber foods require more chewing and are more difficult to digest, so you use up more calories eating them.’

Rachel Carmody, a researcher at Harvard University’s department of human evolutionary biology, has shown that sweet potatoes provide more calories when cooked because the starch they contain is better digested by the body.

In her latest study, cooked meat is easy to digest than raw meat. During cooking, proteins were broken down, and so were easier to digest.

One of the problems with calorie counting is that it focuses too much on the quantity of food rather than the quality, say experts.

According to Dariush Mozaffarian of the Harvard School of Public Health, it is all about calories in’ versus ‘calories out’ is what causes weight gain. 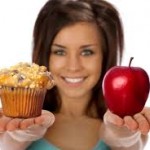