A study by a team of scientists led by Inon Scharf and Susanne Foitzik from the Johannes Gutenberg University of Mainz in Germany, wanted to find out how these socially complex ant species Temnothorax longispinosus reacted to intruders of different species.

To achieve best results, scientists brought ant colonies into their laboratory. The results were published in the journal Ethology.

In the wild T. longispinosus inhabits mixed deciduous forests across the north-east of the US, nesting in cavities of acorns or sticks in the leaf litter.

Scientists introduced workers of four different ant species into the colonies. The first species that was introduced was an unfamiliar one that didn’t share this ant’s habitat.

The second was an ant from the species and the third was a familiar competitor, a related species that did inhabit the same areas.

Finally, the ants encountered the most dangerous intruder, the slavemaker ant.
Slavemakers invade other ant colonies and steal their brood, often killing the host queen and workers in the process.

Temnothorax longispinosus attacking a slavemaker ant. The ants react to the slavemakers with the most aggression.

The enslaved workers emerge from the stolen host brood inside the slavemaker nest.
They then carry out routine tasks for the slavemaker – tending the queen, raising young and foraging for food.

When the little T. longispinosus ants encountered a slavemaker, they attacked and attempt to kill it by biting and stinging.

When they met less threatening opponents, they simply tried to drag them from the nest. Scientists were surprised that ants can make a clear distinction though it makes sense in terms of evolution. 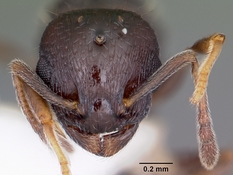