One popular dish in northeast Thailand is called ‘pla som,’ or sour fish, which is made by mixing raw fish, garlic, salt, steamed rice and a pinch of seasoning powder.

The mixture is shaped into egg size portions, put into plastic bags and left to sit in the tropical heat for 3 days. That is not nearly long enough to kill the parasites, which die only after at least six months of fermentation.

The villagers in this poverty-stricken farming community are passionate about their food, especially the traditional varieties of fermented fish that one aficionado describes tasting like heaven but smelling like hell.

For the past three decades Dr. Banchob Sripa, the head of the tropical disease research laboratory at Khon Kaen University, has led an unsuccessful campaign against the parasite, known as a liver fluke and which is also endemic in Cambodia, Laos, Vietnam, parts of China, the Korean Peninsula and Siberia.

Transmitted through feces, the parasites thrive in rural areas without proper sanitation, and they rely on snails, fish, cats and humans as hosts.

The deadly effects of eating parasite-infected raw fish accumulate over decades. Somewhere between 1 percent and 5 percent of people infected with the parasites contract liver cancer.

The deadly cancer is relatively uncommon in most parts of the world but represents the majority of the 70 liver cancer deaths a day in Thailand, according to Dr. Banchob.

Cooking the fish would eliminate the risk of infection. But the battle against liver flukes is being undermined in Thailand by a deeply ingrained love of the sour and smoky tasting fermented dishes that generations of villagers have relished.

Some villagers cannot break the habit and has preferred to take the risk by traditionally eating it raw, despite telling them to either boil or cook it said Nutcharin Yanarangsri, a volunteer at health clinic. 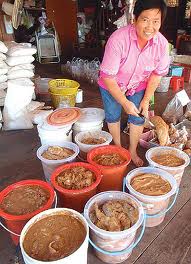