After a long wait, it’s now set for the 2011 Masters Tournament to begin on April 7 at Augusta.

Tiger Woods is grouped together with U.S. Open champion Graeme McDowell and Robert Allenby on April 7 & 8.

Defending champion Phil Mickelson is in the same group as Geoff Ogilvy and US Amateur champion Peter Uihlein.

World number one and two Martin Kaymer and Lee Westwood will also go round Augusta National together along with American Matt Kuchar.

Play will begin at 7:40 a.m. on April 7, with ceremonial tee shots from Arnold Palmer and Jack Nicklaus, followed by the first group of Jonathan Byrd, Ross Fisher and Sean O’Hair, at 7:45.

According to tradition, defending Masters champion Phil Mickelson will play with the U.S. Amateur champion, Peter Uihlein. Geoff Oglilvy is also in the group, which will tee off at 1:48 p.m. on April 7 and 10:30 a.m. on April 8.

The telecast of the first and second rounds will start an hour earlier than usual this year, airing from 3 p.m.-7:30 p.m. Eastern time April 7 and April 8 on ESPN. 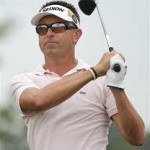