Former California Gov. Arnold Schwarzenegger and his wife of 25 years, Maria Shriver, announced that they are separating.

While they decided to live separately, they would continue to look after for their four children together.

They did not provide details where they would stay after their announced separation.

“This has been a time of great personal and professional transition for each of us,” the two said in a prepared statement.

Schwarzenegger, a Republican, finished his seven-year term as California governor in January.

Shriver, a member of the Kennedy clan, is a daughter of Eunice Kennedy and was an NBC news reporter before joining her husband who was elected governor of California in 2004. 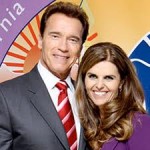