It has been noted that Americans are talking less on their cellphones. When they do talk, the conversations are shorter, according to industry data.

Partly, this reflect the shift in the use of cellphones more as mobile computers that communicate via email or text messaging.

There is also a shift in etiquette, experts say. People increasingly prefer the use of text messaging in arranging telephone calls which are reserved to more important matters.

Sprouting social networks like Facebook, Twitter and others are products of hybrid communication, media distribution and unrefined self expression while new digital devices like iphone or android smartphones, ipod player and ipad tablets are nurtured for more adaptive innovation and experimentation, which expert say is the rule in a period of rapid change.

It has been also noted that much of the communication on personal blogs was about ‘sociability’ and has shifted to social networks like Facebook, says John Kelly, lead scientist at Morningside Analytics, a research firm in New York City.

But professional blogs meant for public consumption and focused subjects like politics and news are thriving, Mr. Kelly noted. Media evolution also claim casualties, but those are more often through distribution or storage.

Photographic film is supplanted though, but people are taking more pictures than ever. Musical CDs no longer dominate, as music can be easily accessible online. Technology by no means is the only agent of change.

In the 1950’s radio and the movies were challenged by television. Today traditional media companies face the adaptive challenge posed by the internet.

That challenge is not just the technology itself but how it has addressed people’s habits of media consumption. As media evolves continuously so does also change people’s attitude and behavior accordingly, it said. 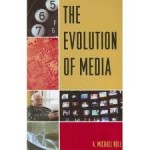