Adlai known also as Job’s tears with a scientific name of Coix lacryma-jobi L. is a freely branching upright plant that grows to three feet tall and is being propagated through seeds.

Its grain is tear like shape which comes as white or brown, belongs to the grass family or Poaceae, the same to which wheat, corn and rice belong.

Adlai grains are usually harvested from four months to five months after sowing. Grains are separated from the stalks through threshing similar to rice and the seeds are sun dried prior to milling.

Adlai is nutritious and potentially a good substitute to rice and corn, it is 50 percent starch, 14 percent protein and only 6 percent fat.

In India, it has been used as a cereal. The pounded stuff is sometimes mixed with water like barley and some turn it into a sweet dish by frying and coating it with sugar. It is also boiled and eaten like rice.

Adlai grains are also used in soups and broths, it is the main ingredient in a in a sweet and cold Vietnamese soup known as sam bo luong which is usually consumed in the southern part of Vietnam.

If fermented, adlai grains can be made into beer or wine. In Korea, adlai grains among with rice, are the chief ingredients in okroju a known liquor locally.

Aside from its uses as food and drink it is also used as an alternative medicine which has shown pharmacological effects of healing a wide range of ailments.

Traditionally, it has been used as medicinal treatment to many ailments, to partially name them like: arthritis, beriberi, diabetes, goiter, pneumonia, pleurisy, worms, etc., however, it has to be scientifically verified to warrant an approved therapeutic claim.

Studies have shown though, that adlai has anti allergic, anti mutagenic, hypolipemic and anti diabetic effects.

In the Philippines, the Bureau of Agricultural Research (BAR) are closely working with two Non Government Organizations (NGO), to explore the other potentials and the various benefits of adlai as a staple crop other than as a good substitute for rice and corn. 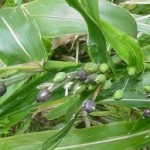