Three weeks ago, Robin Gibb publicly declared that he was on the road to recovery and can’t hide his gratification over being ‘in remission’ from cancer.

He has suffered repeated problems from a twisted bowel, understood to be the cause of his latest hospital spell.

At first his illness was thought to have been due to the hereditary intestinal condition which led to the death of his twin brother Maurice at the age of 52.
The chart-topping singer underwent surgery for colon cancer after months of ill health.

In February he had talked about feeling ‘fantastic’ following his treatment and said he had begun to put on weight after looking increasingly gaunt.

He was quoted telling a friend at the time, ‘I could not have done it without Dwina (his wife). She has never left my side and is a wonderful person.’

Speaking about his cancer, he said, ”The prognosis is that it’s almost gone and I feel fantastic and really from now on it’s just what they could describe as a ‘mopping-up’ operation.”

In an interview earlier this month, Gibb pondered whether his illness is ‘karma’ for the fame and fortune.he has enjoyed.

‘I sometimes wonder if all the tragedies my family has suffered, like Andy and Maurice dying so young and everything that’s happened to me recently, is a kind of karmic price we are paying for all the fame and fortune we’ve had.

Gibb has been aiming to perform at his symphonic work’s live debut on April 10. He was forced to cancel all existing commitments prior to the Titanic Requiem concert, as he recovers in hospital after his surgical operation over the weekend. 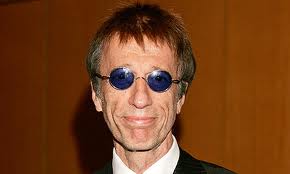