World no. 2 Rafael Nadal defeated Jo-Wilfried Tsonga of France 6-2, 5-7, 6-4 in the quarter-final at the Sony Ericsson Open in Miami.

Nadal will be meeting fourth seed Andy Murray in the semi-final after the Briton secured a 4-6, 6-3, 6-4 victory over Serbia’s Janko Tipsarevic .

The Spaniard served for the match at 5-4 in the second set but Tsonga won three straight games to force a final set.

However, Nadal broke the Frenchman in the ninth game of the third to lead 5-4, and survived two break points in the final game.

The British number one tennis player lost the first set, with several unforced errors proving costly after he had led 4-2.

Murray received treatment for a stomach complaint after the first set, but rallied to claim victory despite a far from convincing display.

Ninth-seed Tipsarevic put up a good fight as he looked to take advantage of Murray’s discomfort.

But in the end, the 2009 champion’s fighting instinct saw him battle back into the match and secure the win after two hours and 39 minutes.

Murray feels the Miami surface gives him a better chance of success against Nadal.
“I think hard courts are the best surfaces to play him on,” he said. 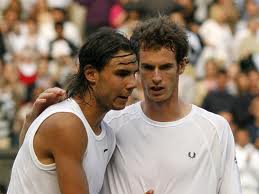