Jon Bon Jovi is the latest celebrity victim to be rumored in the social media that he has died.

But the rock star went on to stop the rumor mongering and to prove in his Facebook account that he is still alive and well.

The rumors of Bon Jovi’s death did not come from a reliable source but from a random WordPress blog that claimed he “was pronounced dead today after paramedics found him in a coma at his Empress Hotel, city and law enforcement of Asbury Park”.

The 49 year old rocker from New Jersey, tweeted a humorous photograph in response to Internet rumors suggesting he had died.

In the picture, Jon is standing in front of a Christmas tree wearing one of his standard black muscle T-shirts.

Heaven looks a lot like New Jersey: Jon Bon Jovi tweets that he’s alive and well after death rumors cropped up of him.

Bon Jovi is not the only celebrity to fall victim to social media rumors.

In October 2009, rumors Kanye West had been killed in a ‘bizarre car crash’ in Los Angeles began circulating, she was a victim of a social media network hoax.

Rick Astley, who has become somewhat of an internet celebrity thanks to ‘Rick Rolling’, was another victim of social media death hoax . 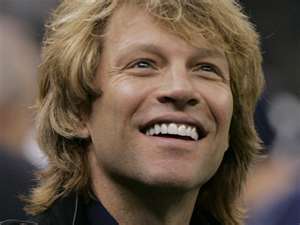