Brandt Snedeker defeated Luke Donald in a playoff on the 18th hole during the final round of The Heritage at Harbor Town Golf Links in Hilton Head Island, South Carolina.

Donald missed a chance to claim golf’s World No. 1 ranking, losing a playoff to Snedeker on third extra hole.

Donald birdied the 18th and parred the 17th in the playoff only to see Snedeker match him each time.

Snedeker parred at 18 on the third playoff hole but Donald’s par bid from the edge of the green lipped out to end the drama.

Donald, who began the week ranked third, passed idle top man Martin Kaymer of Germany and with a victory would have been number one for the first time.

Instead, the top spot goes again to England’s Lee Westwood, who won the Indonesian Masters to pass Kaymer and stay in front of Donald, who would have joined Westwood and Nick Faldo as the only Englishmen to claim World No. 1 with a victory.

Snedeker, whose only prior US PGA crown came in 2007 at Charlotte, fired the best round of the day, a seven-under 64, to finish 72 holes on 12-under par 272 then waited two hours for Donald in the last group to match him. 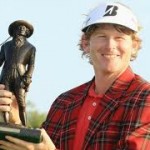