A preliminary report about the damage in Japan’s quake has just been concluded by the Geotechnical Extreme Events Reconnaissance, (GEER) advance team, in whose work is supported by the National Science Foundation.

The broad geographic extent of the liquefaction over hundreds of miles was daunting to experienced engineers who are accustomed to seeing disaster sites, including the recent earthquakes in Chile and New Zealand.

Some degree of soil liquefaction is common in almost any major earthquake. It’s a phenomenon in which saturated soils, particularly recent sediments, sand, gravel or fill, can substantially loses strength and stiffness in response to an applied stress usually earthquake shaking or other sudden change in stress condition, causing it to behave like a liquid.

This can allow structures to shift or sink and significantly magnify the structural damage produced by the shaking itself.

But most earthquakes are much shorter than the recent event in Japan, said Scott Ashford, a professor of geotechnical engineering at Oregon State University and a member of the research team.

The length of the Japanese earthquake, as much as five minutes, may force researchers to reconsider the extent of liquefaction damage possible in situations like this.

The data provided by analyzing the Japanese earthquake, researchers said, should make it possible to improve the understanding of this soil phenomenon and better prepare for it in the future.

Ashford said it was critical for the team to collect the information quickly, before damage was removed in the recovery efforts.

The recent survey in Japan identified areas as far away as Tokyo Bay that had liquefaction-induced ground failures. The magnitude of settlement and tilt was “larger than previously observed for such light structures,” the researchers wrote in their report.

Impacts and deformation were erratic, often varying significantly from one street to the next. Port facilities along the coast faced major liquefaction damage. Strong Japanese construction standards helped prevent many buildings from collapse, even as they tilted and sank into the ground. 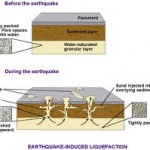