The infant is born into a world full of hostile microbes with a not trained immune system and lacking the caustic stomach acid that in adults kill most bacteria.

The researchers are trying to dissect milk on the theory that it has been shaped by million years of evolution and holds information about how best to feed and defend the human body.

Though milk is designed for infants, a large part of mother’s milk cannot be digested by babies and seems to have a purpose quite different from infant nutrition, that of influencing the composition of the bacteria in the infant’s gut.

Researchers have found that a particular strain of bacterium, a subspecies of Bifidobacterium longum, possesses a suite of genes that enable it to thrive on the indigestible component of milk.

The complex sugars, might be used to help premature babies, or those born by Caesarian section, who do not immediately acquire the bifido strain.

Infants presumably acquire the special strain of bifido from their mothers, the indigestible substance that favors the bifido bacterium is a slew of complex sugars derived from lactose, the principal component of milk.

The complex sugars consist of a lactose molecule onto which chains of other sugar units have been added.

“We were astonished that milk had so much material that the infant couldn’t digest,” said Bruce German, a researcher at the University of California.

“Finding that it selectively stimulates the growth of specific bacteria, which are in turn protective of an infant. Let us see the genius of the strategy, mothers are recruiting another life form to baby sit their baby.”

The human genome does not contain the necessary genes to break down the complex sugars, but the bifido subspecies does, the researchers say in the proceedings of the National Academy of Sciences.

The complex sugars were long thought to have no biological significance. Besides promoting growth of the bifido strain, they act as decoys for noxious bacteria that might attack the infant’s intestines.

The bacteria in breast milk plays a crucial role. Babies have not trained immune systems that cannot counteract the effects of acids. Breast milk sugars help protect them. 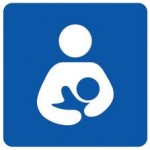