According to Danish actress Brigitte Nielsen that her love affair with Arnold Schwarzenegger started way back in her film debut in 1985 where she starred alongside with him in the film, ‘Red Sonja’.

She had the relationship with him, despite Schwarzenegger dating Maria Shriver. She doesn’t know exactly how serious their relationship was when ask by scribes.

“He never spoke about her,” she continued, “and the way he was living his life with me…I felt I was the only one. Then I realized about him and Maria and, wow, I felt cheated.”

Nielsen, later married Sylvester Stallone after she starred with him in Rocky IV. Recently, she was shocked upon learning in the media about Schwarzenegger’s adulterous activities.

“I’m surprised Arnold thought he could get away with it and I feel bad for Maria,” she said. 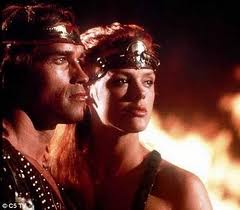