The initial vote counts had the National League for Democracy (NLD) Party of Nobel Peace Prize laureate Aung San Suu Kyi winning in more than 30 of the 45 seats contested on Sunday, according to party officials.

Supporters of Burma’s opposition icon Suu Kyi erupted in euphoric cheers after her party said she won a parliamentary seat in a landmark election, setting the stage for her to take public office for the first time as Member of Parliament (MP).

The victory claim was displayed on a digital signboard above the opposition NLD’s headquarters in Rangoon, where more than 1000 supporters began wildly shouting upon learning the news.

The victory, if confirmed, would mark a major milestone in the southeast Asian nation, where the military has ruled almost exclusively for a half-century and where a new reform minded government is seeking legitimacy and a lifting of Western sanctions.

It would also mark the biggest prize of Suu Kyi’s political career, and a spectacular reversal of fortune for the 66-year-old democracy icon who the former junta had kept imprisoned in her lakeside home for the better part of two decades.

Earlier, the party had claimed that Suu Kyi was ahead with 65 per cent of the vote in 82 of her constituency’s 129 polling stations.

The party had staff and volunteers spread throughout the vast rice-farming district, who were calling in preliminary results by phone to their headquarters.

The NLD declared victory for Suu Kyi in Kawhmu township, 30km south of Rangoon based on unofficial tallies that began after voting ended.

Many of the villages in Kawhmu are small, making the vote tally a quick affair. Lawlaud village, for instance, had only 300 voters, of who 270 voted for Suu Kyi while only 30 voted for her rival Soe Min of the government’s Union Solidarity and Development Party.

The results must be confirmed by the official electoral commission, however, which has yet to release any outcome and may not make an official declaration for days. 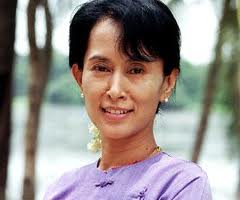