World no. 1 Novak Djokovic lived up to being the defending champion of the title by beating the fourth seed Andy Murray a 6-1, 7-6(4) victory to clinch his third Sony Ericsson Open title in Miami.

The Serb joins Andre Agassi and Pete Sampras as the only men to win three or more Miami titles and is the first back-to-back champion since Roger Federer in 2005-2006.

Djokovic has been the best player throughout the tournament, reaching the final without dropping a set.

Murray, by contrast, had seen his rhythm disrupted by two injury-enforced walkovers earlier in the week, and a mixture of lackluster errors from the Brit and stubborn serving from Djokovic.

It took two hours and eighteen minutes for the defending champion to dispose Murray.
“I managed to come up with my best tennis when I needed to so I’m delighted. I’m now really looking forward to the clay season, said the five-time Grand Slam champion, Djokovic.

“Hopefully the highlight will be the French Open, which is top of my priority list with the Olympics.”

Djokovic was very much in control, both from the baseline and during his brief ventures to the net, and another booming forehand led to back-to-back breaks of the Murray serve, allowing him to close out the first set 6-1 with an ace.

In the second set, it was Murray being made to work harder against the depth of Djokovic’s ground strokes, and he had to save another break point after he double-faulted for only the second time and they had to contend with an additional tiebreaker to decide it.

Murray won the point of the match with a quite incredible running drop shot from outside of the court. However, an untimely double-fault handed the advantage to Djokovic at 3-2, and the world No. 1 closed out the match to capture his third Miami Masters’ title. 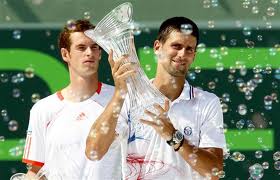