The camera is based on the gamma ray observing sensor technology and was developed for the agency’s next X-ray observation satellite, ASTRO-H.

The prototyped equipment is expected to be able to create visual images of radioactive particles that have collected at high altitudes such as building roofs where it is difficult to conduct measurements with present available equipment.

JAXA, the Japan Atomic Energy Agency (JAEA) and the plant’s owner, the Tokyo Electric Power Company (TEPCO) conducted a successful field test of the camera at the Kusano area of Iitate village in Fukushima Prefecture.

Images produced with the new camera are more precise than those taken with imaging equipment currently in use, and is able to capture images at an angle of nearly 180 degrees, three times wider than existing models.

Professor Tadayuki Takahashi of the space agency says his team will work to make the camera lighter so that it can help in environmental decontamination operations.

There are still dangerously high radiation levels at Japan’s crippled Fukushima Dai-ichi nuclear reactor, but with the prototype, the plant’s owner is able to see the normally invisible threat.

Radioactive contamination from the Fukushima power plant disaster has been detected in the Pacific Ocean more than 370 miles off the Japanese coast.

Samples of plants, plankton and ocean water showed levels of the liquid metal cesium were almost 1,000 times greater than normal.

The total amount of gamma rays emitted by cesium 137 and 134 are captured in six different colors in an image taken with a wide-angle lens, with red representing the highest and yellow second highest radiation levels.

At the moment there is still fatally high radiation levels at the plant and much less water to cool it than officials had thought, according to an internal examination. 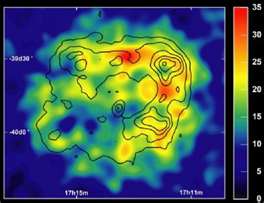