Robert Redford who played a journalist in the 1976 movie ‘All the President’s Men’ has signed up to produce a documentary for the Discovery Channel about the Watergate affair.

The controversy surrounds with the break-in by Republican operatives two years earlier at the Democratic National Committee headquarters in the Watergate apartment complex in Washington, prompted Richard Nixon to resign the presidency in 1974 when he was implicated in a plot to cover up the incident.

The documentary takes its name from ‘All the President’s Men,’ the 1976 film by Alan Pakula in which Redford and Dustin Hoffman portrayed Bob Woodward and Carl Bernstein, the Washington Post reporters who exposed the Watergate affair.

The documentary marks the start of Sundance Productions, recently launched by Redford to create programming for television broadcasters and the Internet, it added.

The Hollywood icon will also narrate ‘All The President’s Men Revisited’, an upcoming two hour TV special about the infamous political outrage that led to US President Richard Nixon’s downfall.

The new documentary has been commissioned by the Discovery Channel and will explore the effect the scandal has had on US politics and the media in the four decades since.

Woodward said the documentary would touch upon the role of Mark Felt, a former associate director of the FBI who in 2005 revealed himself to be Deep Throat, the long anonymous Watergate whistle blower.

The new documentary will premiere on the Discovery Channel in the US next year. 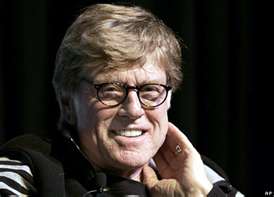