After getting the world attention as in a tight-fitting, white bridesmaid’s dress, in the royal wedding of her elder sister, Kate to Prince William, Pippa Middleton has gone on its own and standing all alone in the spotlight.

People are wondering, if Pippa mania might be the formula to boost tourism to the United Kingdom, a US$ 130 billion dollar a year industry that’s been hit hard by a weak dollar and drop off in American visitors.

It has been reported that many restaurants, hotels and attractions are ‘overpriced or lacking in quality,’ and it has left the impression that Britain is not that cheap for tourists.

According to Barbara Gillam, the New York-based travel professional and Anglophile, that despite the challenges, “Pippa’s aura may very well boost tourism, not to mention Pilates and the designers’ outfits she’s seen in.”

The more people learn about Pippa and her association about just anything, whether it be an Alexander McQueen dress, a Zara jacket or Pilates, a core-building exercise discipline that may inspire people to stay in tip-top shape as they pack their bags heading for the new Britain. 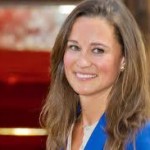