U.S. President Barack Obama and his wife Michelle step down from Air Force One, after arriving at Stansted Airport, near London, late Monday, May 23.

The US President and First Lady are in a state visit to Britain and will meet with Prince Williams and the former Kate Middleton in an informal setting prior to the official welcome from Queen Elizabeth II and Prince Philip.

The royal couple, who have recently returned from the Seychelles from their honeymoon, were not originally on Mr. Obama’s schedule.

The president and his wife did not attend the recent royal wedding, so the visit will give them an opportunity to congratulate the couple in person.

It’s only the third state visit by a U.S. president to the Britain in 100 years. In Mr.Obama’s visit, The United States and Britain will tackle and cooperate closely on issues ranging from Libya to Afghanistan, counter-terrorism and the Middle East peace process.

Obama and his wife are staying at the palace as guests of Queen Elizabeth II, William’s grandmother, during a three-day state visit to Britain.

The trip started a day early when the Obamas flew in late Monday from a trip to Dublin to avoid the volcanic ash cloud. 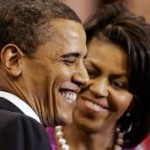