The Organization for Economic Cooperation and Development (OECD) has said that pressures on Earth’s ecosystem are so great that future generations could be doomed to falling living standards, as it assessed a report looking halfway of this millennium.

“Providing for a further two billion people by 2050 and improving the living standards for all will challenge our ability to manage and restore those natural assets on which all life depends,” it warned.

“Failure to do so will have serious consequences, especially for the poor, and ultimately undermine the growth and human development of future generations.”

The report by OECD is a glimpse what is in store into the future, ending in 2030, that focused on the following: climate change, biodiversity and the impacts on health for pollution.

“The prospects are more alarming than the situation described in the previous edition,” it said, speaking of “irreversible changes that could endanger two centuries of rising living standards.”

The report demonstrated the following:

**** Climate Change – Carbon emissions from energy use are likely to rise by seventy percent by 2050, “locking in” more disruptive climate change. On present trends, the world’s average temperature will be 3 to 6 degrees Celsius (5.4 to 10.8 degrees Fahrenheit) higher than in pre-industrial times, compared with the UN’s target of 2 C (3.6 F).

To reach the 2 C (3.6 F) goal would cost only 0.2 percentage points in economic growth each year on average if starting today.

“This pales alongside the potential cost of inaction, which could be as high as 14 percent of average world consumption according to some estimates,” the OECD warned.

In fact, previous estimates of the cost of climate action may be too high, as they fail to take into account its benefits in job creation and new technology, it said.

**** Biodiversity – Species loss is set to continue, especially in Asia, Europe and southern Africa.
According to a scientific benchmark called mean species abundance, diversity of land species is expected to fall by 10 percent by 2050 compared with today. Already about a third of freshwater species diversity has been lost.

“The current trend of declining biodiversity presents a threat to human welfare, and will be very costly,” said the report. “The aggregate loss of biodiversity and ecosystem service benefits associated with the global loss of forests, for example, is estimated to be between US$ 2 trillion and US$ 5 trillion per year.”

**** Health – No country will be spared worsening problems of air pollution, according to the OECD’s scenarios. Levels in some cities, particularly in Asia, already far exceed World Health Organization (WHO) safety limits.

“With growing transport and industrial air emissions, the global number of premature deaths linked to airborne particulate matter is protected to double to 3.6 million a year, with most deaths occurring in China and India,” it said.

But rich countries, too, will be hit. Ground-level ozone, a respiratory irritant caused by the reaction of traffic fumes with sunlight, will be a danger to their aging, highly urbanized populations.

The report, OECD Environmental Outlook to 2050, reissued appeals for a change in policy.
Pollution should be made more expensive, such as by scrapping environmentally damaging subsidies for fossil fuels, it said.

And natural assets should carry a monetary value that is factored into pricing, so that their true worth is appreciated.

“Progress on an incremental, piecemeal, business-as-usual basis in the coming decades will not be enough,” it said. 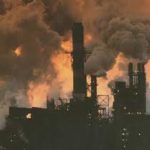