With a January deadline looming on a US law mandating energy efficiency standards for light bulbs, more than a dozen Republican lawmakers are backing efforts to repeal the 2007 law.

The US law does not ban incandescent bulbs, but creates new standards for them, basically requiring increased efficiency, so that the bulbs with a lighting equivalent of 100 watts consume just 72 watts.

More than a dozen Republican lawmakers are backing efforts to repeal the 2007 law that requires bulbs to consume less energy.

Meanwhile Texas has enacted a law that would exempt itself from the federal requirement, and other states are debating similar legislation.

Some consumers have also begun hoarding the old incandescent bulbs based on an erroneous fear that these will be banned starting January 1 and consumers will be forced to buy compact fluorescent lamps or other new types of bulbs.

Representative Joe Barton and others argue that the new law, which was signed by Republican president George W. Bush, would force consumers to switch to compact fluorescent lights (CFLs), most of which are not made in the United States.

But the survey also showed 59 percent of respondents “eager to use more energy efficient lighting solutions,” the company said.

Industry representatives say there are public misconceptions about the law, including the notion of a ban on incandescent.

Larry Lauk, spokesman for the American Lighting Association, said any new legislation may not change what manufacturers are doing in creating more efficient bulbs that use halogen, LED or other new technology. 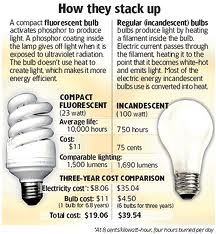