Cassava flour preparation is one of the traditional methods of preserving and adding value to the staple root crop that is widely practiced in Africa.

The flour prepared from cassava using the traditional methods is often fermented and frequently of poor quality, thus making it unsuitable as a substitute for wheat flour in bakery products.

Manufacturers of bakery products are mainly more concerned with acidity, gross contamination and cyanide rather than microbiology or specific pasting characteristics.

The major setbacks for the IITA process are access to processing equipment, power to provide mechanization and reliance on good weather for drying the product.

In a tropical country like Nigeria, weather appears to be the major bottleneck in producing cassava flour. For it can reduce production rates by 90 percent and interfere with delivery and reductions in product quality and its pricing.

Prolonged drying leads to fermentation of the wet mash and a reduction in pH value which can virtually reduce the quality of the cassava flour produced.

The success of high quality cassava flour In Nigeria as a partial substitute for wheat flour has been mainly due to economic factors and changes in government policy.

Experience gained during this period has led food manufacturers to more readily accept cassava flour as a cheaper alternative to wheat flour if processors can provide the necessary quality.

Production of cassava flour is a relatively simple procedure requiring access to small amounts of clean water for root washing, and a number of items of processing equipment.

These costs could be reduced if the group could gain access to a central mill facility equipped with hammer mills and possibly mechanical graters as well, or by using a belt drive to power the grater and mill from a single engine.

The stakeholders in this system are cassava farmers, primary processors and end users of cassava flour. The end users have an important role to play in this system as they provide demand for the product, set quality standards and offer incentives for production of consistent quality.

Cassava has advantages as a raw material for flour production because of the ease of processing and low capital investment required in establishing a processing unit.

In addition cassava flour has a bland flavor and is thus unlikely to alter the flavor of any product in which it is used. The example from Nigeria appears to have potential for replication elsewhere.

In cassava flour production, the major bottleneck would appear to be the rapid drying of cassava, throughout the year. This is an area that could benefit by further research and development.

One should not underestimate the benefits of using cassava flour as a wheat flour replacement, could equate to an annual foreign exchange savings utilizing it.

As international trade agreements are reached which will probably reduce the availability of wheat as a food aid item and increase the world price of wheat and wheat flour, the benefits of using cassava flour should increase.

**** Grate by means of a mechanical grater 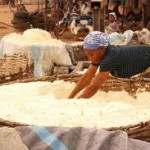