There is a distinct correlation between comb size and bone mass in hens laying more eggs as researchers put it.

The influence has something to do with the hen’s bone tissues that provide calcium for the eggshells so the greater the bone mass, the more eggs she can lay.

Besides, researchers have discovered how much chickens favor good looks in the opposite sex after finding that the hen with the largest comb gets more attention from roosters.

A research group at Linköping University in Sweden has now shown how the size of a hen’s comb is bound up with the ability to lay more eggs. The results have been presented in the scientific journal PLoS Genetics.

The original breed of hens have smaller combs, thinner legs, and lay fewer eggs, but with human intervention who has taken over natural selection, domesticated animals has lost its role, as it was humans who determine breeding choices that influence their genetic make up.

The research group led by evolutionary geneticist Dominic Wright, set up a study where such chickens were crossed for several generations.

In this way the genome was split up into smaller and smaller regions, which allowed the ‘mapping’ of the functions of individual genes.

In the eighth generation, the researchers found an area that had a strong effect on the weight of the comb but also on bone mass and fertility of the chicken.

The genetic variation has gradually decreased over the course of chicken domestication.

There are now some forty stable genes that potentially govern their typical ‘domestic’ characteristics.

By regulating the production of cartilage, so with the influence of combs, bone growth and egg production.

In nature bigger comb in hens serve as a sexual attraction to the opposite sex as they are the preferred mates by the roosters, thereby they are bound to produce more eggs. 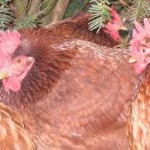