Kobe Bryant was fined US$ 100,000 dollars after losing his cool using a homophobic slur aimed at the NBA referee during Tuesday’s game against the San Antonio Spurs.

Kobe Bryant’s comment during last night’s game was offensive and inexcusable,’ NBA commissioner David Stern said in a statement released by the league on Wednesday evening.

‘While I’m fully aware that basketball is an emotional game, such a distasteful term should never be tolerated. Accordingly, I have fined Kobe 100,000 dollars. Kobe and everyone associated with the NBA knows that insensitive or derogatory comments are not acceptable and have no place in our game or society.’

The incident occurred midway through the third quarter after Bryant was whistled for a technical foul in the Lakers 102-93 win over the Spurs.
With national television cameras fixed on him, the agitated Lakers superstar stormed to the bench, punched his chair and threw a towel before taking a seat.

Earlier Wednesday, Bryant attempted damage control to explain what led up to his insensitive remark.

‘What I said last night should not be taken literally,’ he said in a statement. ‘My actions were out of frustration during the heat of the game, period. The words expressed do not reflect my feelings towards the gay and lesbian communities and were not meant to offend anyone.’ 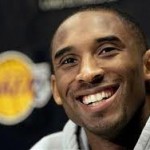 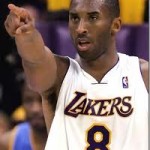