In a crowd at Fort Lauderdale, Florida, Charlie Sheen unravels a surprising revelations about his love life.

He was telling the crowd that he was disappointed to have one ‘goddess’ remaining because Bree Olson his other ‘goddess’ has left him.

Bree Olson, 23, and Natalie Kenly, 24, are his two ‘goddesses’ that had been making cameos together on stage during Sheen’s live tour stops, often making out in the spotlight.

Prior to Fort Lauderdale, the fired ‘Two and Half Men’ star was in Tampa requesting for support in the resumption of his lucrative sitcom career.

Despite the denial of Warner Brothers and confirming that there’s no purportedly discussion going on and there will be no discussion in the future as far as they are concern regarding his coming back to the hit comedy sitcom, the 45-year-old TV star is still hopeful about his future on CBS. 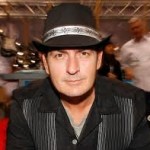