South Korea’s Charlie Wi shoot a a three-under round of 69 on a second day of Pebble Beach Tour.

Wi holds a three shot lead over Dustin Johnson who occupies 2nd place in the second round.

The South Korean took 29 putts but his up and down round included five birdies, an eagle and four bogeys.

With the weather changing from sunny to drizzle through the day Woods shot a two-under 68 on the easiest of the three courses, the Monterey Peninsula Country Club, to lie at six under at halfway.

Tiger Woods was among those caught in the bad weather. Lying in a tie for 16th, Woods added about the deteriorating weather: ‘The golf course got a little interesting coming in.’

Dustin Johnson, a winner of the tournament in 2009 and 2010, shot an even-par 72 on Spyglass Hill to sit three shots behind Wi.

Ireland’s Padraig Harrington ended the day in a tie for third at eight under. Harrington added a 66 to his first round 68 to join Americans Brian Gay and Brendon Todd, Fiji’s Vijay Singh and New Zealand’s Danny Lee.

England’s Greg Owen added a 67 to his opening 68 to sit on seven under in a nine-way tie for eighth. 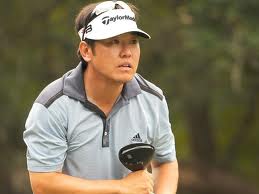