LeBron James, the Miami Heat forward has reacted to Scottie Pippen’s comparison between him and Michael Jordan but simply commented that he does not believe he’s done enough to merit mention among the game’s greatest players.

Pippen, who won six consecutive championships alongside with Jordan in Chicago during the Chicago Bulls’ epic run in the 1990s has this to say, “Jordan is probably the greatest scorer to play the game, James may be the greatest player to ever play the game.”

In Pippen’s twitter account he even backed up his comments through his tweets, hours after his words sparked like wildfire. Later, Pippen try to mellow his previous remarks by saying that while he thinks “Jordan is the greatest, James could reach that pinnacle in time.”

James seemed uncomfortable with the discussion dragging his name alongside with some basketball greats by saying “Michael’s an unbelievable player,” James said.

“I’m gracious. Humbled by Scottie’s comments, especially with him being a teammate of his and seeing Michael on a day-to-day basis. But as far as me, I’m not going to sit here and say I’m better than Jordan. I’m not better than Jordan,” he added. 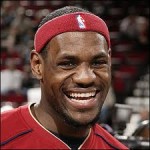