Obesity is a growing problem around the world with more people becoming obese and at a younger age.

Young children with a Body Mass Index (BMI) greater than 20.5 are classified as severely obese. By the time they reaches the age of 18, A BMI of 35 is a sign of severe obesity.

Two-thirds of the 307 children studied had a least one early symptom of hypertension.

By age 12 they had high cholesterol, blood glucose and blood pressure, according to the study in the journal Archives of Disease in Childhood.

Just over half of these 307 children were boys. They tended to be more severely obese at the younger end of the age spectrum; the reverse was true of girls.

Only one child’s obesity was attributable to medical rather than lifestyle factors.
Doireann Maddock, a senior cardiac nurse with the British Heart Foundation, said: “Highlighting the importance of healthy eating and physical activity from an early age will help protect the heart health of future generations.”

Dr. Joana Kist-van Holthe, Department of Public and Occupational Health, at the University Medical Center, Amsterdam, wrote: “The prevalence of impaired fasting glucose in these children, is worrying, considering the increasing prevalence worldwide of type 2 diabetes in children and adolescents.”

The researchers said this ‘may lead to cardiovascular disease in young adulthood’. 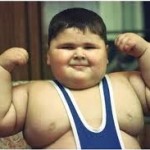