The World Cancer Research Fund (WCRF) is calling for a standardized form of color coded labeling on foods, which it says would help consumers to better control the amount of salt, sugar and fat they take.

The WCRF has called for the color coded system for food labeling, red for high, amber for medium and green for low.

‘Standardized labeling among retailers and manufacturers, rather than the different voluntary systems currently in place, would help consumers make better informed and healthy choices,’ according to Kate Mendoza, head of health information at WCRF.

Too much salt is bad for blood pressure and can lead to heart disease and stroke, but it can also promote cancer by damaging the stomach lining.

Cutting back on salty foods such as bacon, bread and breakfast cereals may reduce people’s risk of developing stomach cancer.

‘If people kept to their daily food intake guidelines, stomach cancers could be prevented,’ the WCRF said.

The recommended daily limit of salt is 6 grams, about a level teaspoonful, but people were eating 8.6 grams of salt a day.

Each year in the UK around 7,500 new cases of stomach cancer are diagnosed and almost 5,000 people die from the disease, however, this figure could be even higher, according to Cancer Research UK.

Lucy Boyd of the Cancer Research UK, said: “This research confirms what a recently published report from Cancer Research UK has shown, too much salt also contributes considerably to the number of people getting stomach cancer in the UK.”

Making lifestyle choices to prevent the disease occurring, such as cutting down on salt intake and eating more fruit and vegetables is enjoined by Katharine Jenner from Consensus Action on Salt and Health.

Eating too much salt is not all about sprinkling it over fish and chips, the vast majority is already inside food, Ms. Jenner added.

It is for this reason why WCRF has called for a color coded system for food labeling to protect consumers. 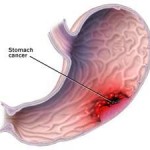