Tens of thousands of children were victims of sexual abuse in Dutch Catholic institutions since 1945, a report says.

A report from an independent commission said Catholic officials had failed to tackle the widespread abuse at schools, seminaries and orphanages.

The commission, which began work in August 2010, It studied 1,800 complaints of abuse at Catholic institutions, identifying 800 alleged perpetrators, just over 100 of whom are still alive.

It also conducted a broader survey of more than 34,000 people, to gain a more comprehensive picture of the scale and nature of abuse suffered by Dutch minors.

The report estimates that 10,000-20,000 minors were abused in the care of Catholic institutions between 1945 and 1981, when the number of Church-run homes dropped. In the years between 1981 and 2011, several more thousands suffered at the hands of priests and others working for the Church.

Most of the cases involved mild to moderate abuse, such as touching, but the report estimated there were ‘several thousand’ instances of rape.

Abuse by Catholic priests, laymen and laywomen was systematically covered up by the church to protect its reputation, the commission said, adding that the church was guilty of ‘inadequate supervision’ and ‘inadequate action’.

The findings appear to paint a picture of wider abuse in the Netherlands even than in Ireland, in a scandal that has rocked the Catholic Church in Europe and the United States and forced Pope Benedict xvi to apologize to victims of sexual abuse by priests.

The investigation was commissioned by the Conference of Bishops and the Dutch Religious Conference in 2010 after cases surfaced involving pedophile priests in the Netherlands, Belgium, Ireland, Germany, Australia, Canada and the United States. 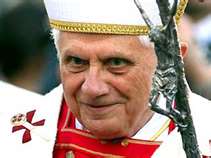