Kopi Luwak coffee, as it is known in Indonesia is produced on the Indonesian island of Sumatra, is made from animal droppings.

The beans are extracted from the droppings of the native palm civet, a cat-like creature that eats only the ripest coffee cherries, but can’t digest the hard centers.

They digest the fruit pulp and excrete the beans on to the forest floor.
The droppings, combined with the animal’s gastric juices, are said to be the key to the coffee’s rich, frothy flavor.

What makes it expensive is the beans are extremely rare and only around 450 lbs. per year are harvested.

Exactly seven grams are weighed out before being brewed and poured into a heated coffee cup, which helps form a frothy layer on top.

It can be served with or without sugar. The coffee is to go on sale at new venue DSTRKT, near London’s Piccadilly.

It boasts a bar, restaurant and nightclub after a US$ 40 million dollars (£25 million) renovation of the Planet Hollywood site.

If the price isn’t enough to shock you, the method by which it is made just might.
It is now only currently available in the UK and Ritz Carlton in Paris. 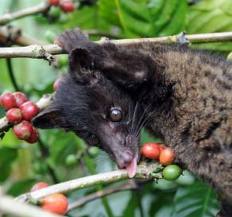