China’s exports due to economic difficulties, faces ‘severe challenges’ to its key Western markets as data show a sharp slowdown in export growth in November, the country’s commerce ministry has warned.

Containers at the port of Tianjin comprise just under 40 percent of China’s total exports to Europe and the U.S. have been falling and its sales were not expected to recover next year.

To offset the expected surplus, China would instead target exports to developing markets in Asia and Latin America.

China will also try to boost its imports from the West, the ministry said, in order to help support their economies and to balance out China’s trade surplus.

Exports to the European Union fell 9 percent in October versus a year ago, and exports to the US fell 5 percent.

The country’s total exports, however, were still up 15.9 percent, thanks in part to booming demand from Latin America.

But it was the weakest annual growth rate in two years, and exports were sharply down compared with a month earlier.

The poor performance was mirrored by a recent manufacturing survey, which indicated that the sector contracted in November for the first time since the 2008-09 Western recession.

China’s plan to focus on developing markets is not realistic, according to Michael Pettis, economics professor at Peking University.

Attempts to increase its exports to the developing world may also meet with resistance.

Recent data showed that Brazil’s economic growth had slowed to a standstill.
The country, Latin America’s biggest, has previously complained about the threat to its own export competitiveness posed by the weakness of Western currencies. 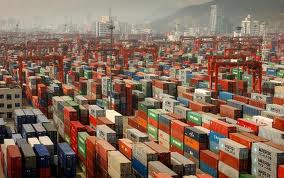