Mark Anthony refused to shoot for their ‘Q’viva! The Chosen,’ the Latin talent show after her exposure with her 24 year old toyboy, the source said.

The two went last month to film the scenes of their talent show on the reality competition format in Puerto Rico.

Since conceiving the show by producers, they seemed amicable and determined to continue the project as a team.

But since the emergence of Lopez’ relationship with back-up dancer Casper Smart, including taking him on a holiday with their twins, they have not been seen together.

Instead, over the last week Lopez has been shooting the show in various Latin American countries without Anthony.

Anthony is said to have refused to work with her after the pair had a blow-up last week while she was in Morocco with the dancer.

‘Inevitably, the discussion boiled down to her new boyfriend, Smart, and Marc made the decision not to work with Jennifer last week as a result.’

He is said to have waited until she was in the air and on her way to Peru to call American Idol creator Simon Fuller, who is also behind their show, to tell him he was considering quitting for good.

When Anthony spoke to Fuller, he reportedly said the reason he was not traveling to the two countries was quite simple, that he can’t work with Lopez.

Another person said to be close to Anthony revealed: ‘It’s his Latin pride. It’s been severely dented.’

Discussions are ongoing to lure Anthony back to the show where million of dollars are at stake for the production and the producers themselves are desperate to pacify whatever tension that their two stars have brought.

Lopez and Anthony announced back then in July, that they were splitting, after 7 years of marriage. 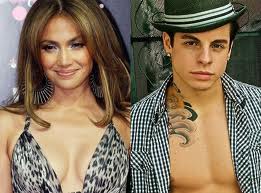