The rejection of democracy comes from leaders like Wu Banggou, the party’s top legislator who in March warned that electoral democracy would drive China ‘into the abyss of internal disorder.’

Chinese middle class willing to be flexible for the government over its autocratic rule. To this group, such restrictions and imperfections are outweighed by non stop double digit economic growth and they have come to appreciate the social stability that comes with autocratic rule.

But the ruling communists, most Western experts agree, are in no danger of being toppled any time soon. Life in China, has undoubtedly improved for most Chinese.

Over the past two decades, annual per capita in urban areas have more than tripled, to US$ 3,100 a year; life expectancy has jumped by more than six years, to an average age of 75; and the ranks of illiterate adults have dropped by 46 million.

Economic growth alone does not explain the widespread aversion to political change among intellectuals and professionals. To aspiring businessmen who play the rules can bring them enormous advantages and benefits.

The benefits can include low interest rates from state banks and the forbearance of an all powerful bureaucracy that could quash a start up company.

The same can be said Of China’s 300 million member middle class, many of whom believe that universal suffrage would over empower their impoverished rural brethren.

It is commonly believed, even among idealistic college students, that Chinese peasants are too unschooled to select the nation’s leaders. 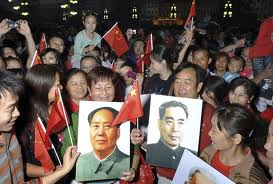