Earlier, Novak Djokovic has won over Jo-Wilfred Tsonga in the semi finals at Wimbledon.

Now, the latest development at Wimbledon, is that Rafael Nadal has eliminated Briton Andy Murray to reach the final at Wimbledon by beating the no. 4 seed in four sets 5-7, 6-2, 6-2, 6-4.

It’s the third consecutive year Murray has lost in the semifinals. The last British man to win Wimbledon was Fred Perry in 1936, and the last to even reach the final was Bunny Austin in 1938.

No matter Sunday’s result, the Spaniard will be overtaken in the ATP rankings Monday by two-time Australian Open champion Djokovic, who’ll rise from No. 2.

It will be the first time since February 2004 that a man other than Roger Federer or Nadal has been No. 1. 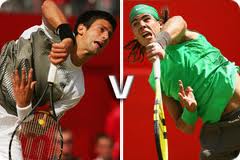