The Serb proved himself the the best player in the world with a convincing win in 4 sets over Nadal. The Spaniard will be overtaken in rankings by Djokovic on Monday as world’s no. 1.

Djokovic becomes the first Serbian man to win Wimbledon. It was his 50th win in 51 matches and his fifth win over Nadal this year.

Djokovic had sufficiently achieved that guarantee him the world’s tennis top ranking whatever the result of his Sunday’s final. Nadal goes down to no.2.

He’s oozing with energy and confidence, needed little encouragement and came haring in to chase down a drop shot in the next game, angling away the backhand to break before turning to his supporters to celebrate.

He came into the match having beaten the Spaniard in four finals already this year, but Nadal, on a 20-match winning streak at the All England Club, was still favored by many to claim a third Wimbledon title as he had won all five Grand Slam meetings with Djokovic. 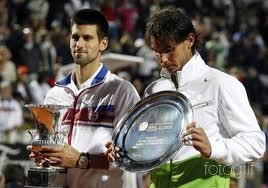