The coconut has maintained its position as the top agricultural crop exported in many forms either as food or non-food classified as traditional or non-traditional, to 130 countries.

Exports receipts from coconut oil and other coconut by products reached an unprecedented level of US$ 1.57 billion dollars.

The country’s coconut industry has an annual average export income of US$ 800 million dollars. In the years 1979, 1995, 2007 and 2010, the Philippine coconut exports reached the US$ 1 billion dollar level, according to the Philippine Coconut Authority (PCA).

According to the PCA, the month of August is traditionally the peak of coconut fruiting season. Thus explains why the coconut festival is mounted within the month as a tribute to the versatility of the so called Tree of Life.

The PCA is spearheading a campaign among farmers to fertilize their coconut farms with two kilos of salt per tree per year for three years to increase yield by at least 25 percent.

Salt fertilization is believed to increase thickness of coconut meat and also increase the number of nuts harvested.

The procedure is also credited for making coconut trees resistant to drought, pests and diseases. 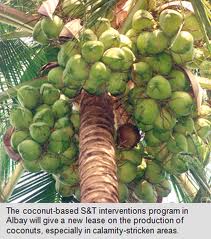