Kiribati President Anote Tong is negotiatng with Fiji’s military government to purchase Vanua Levu, Fiji’s second largest island, to be utilized as a relocation site for his countrymen which had been under threat of rising sea levels.

Mr. Tong’s proposal is the latest in an increasingly desperate search for solutions. Most of its 113,000 people are crammed on to Tarawa, a chain of islets which curve in a horseshoe shape around a lagoon.

The total land area of Kiribati is 313 square miles and none of the coral atolls rises more than a few feet above sea level.

“Our people will have to move as the tides have reached our homes and villages,” according to Tong.

Last year he suggested the possibility of constructing man-made islands like oil rigs for people to live on.

Kiribati youth study baccalaureate courses at the University of the South Pacific, based in the Fijian capital of Suva which is jointly owned by 12 Pacific island countries.

Mr. Tong said the plan would be to send skilled workers first, so they could merge more easily with the Fijian population and make a positive contribution to that country’s economy.

Tong’s government has launched an ‘Education for Migration’ program, aimed at upskilling its population to make them more attractive as migrants.

Some Kiribati islanders hold concerns about whether their culture would survive after the population moves, especially if those who leave first are mainly the young.

The migration and relocation of Kiribati inhabitants to Fiji is what could be the world’s first climate change induced migration of this millennium. 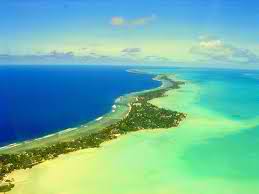