Scientist from the Harvard School of Public Health in Boston, the US, made the diets comparison of 189 men between ages of 19 to 25.

They found that the sperm of men who ate more than three portions of full-fat dairy food a day was 25 per cent poorer quality than those who had less.

Eating the equivalent three ounces of cheese a day can reduce the quality of a man’s sperm, according to the new research.

Myriam Afeiche, who led the study, explained that the female hormone estrogen in milk that had come from the cow may be affecting men’s fertility.

It may also be impaired by pesticides which find their way in to dairy products, she added.

‘While it has been suggested that full-fat dairy products may negatively affect semen quality, very few studies have actually examined this question directly.

‘The association could be attributed to the high levels of naturally occurring reproductive hormones in commercial dairy products.

‘It is also possible that the presence of other compounds in dairy such as pesticides, chlorinated pollutants, and heavy metals could account for this relation.’

According to Dr. Allan Pacey, fertility expert at the University of Sheffield and Chairman of the British Fertility Society pointed out that even though the men’s fertility had gone down, they wouldn’t have any problems conceiving.

‘What I would say about diets is we don’t understand it well enough. I wouldn’t want to scare men out of drinking milk,’ he said. 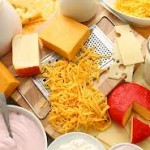