Darren Clarke of Northern Ireland thwarts the hope of American Phil Mickelson to clinch a 3 shot win at the British Open on Sunday.

Clarke took up the coveted first prize of 900,000 pounds (US$ 1.45 million) and an extra bonus of two million pounds from his kit sponsor after firing a level-par 70 on Sunday to finish five-under par.

Clarke won his first major championship with a 5-under 275, following the path of younger countrymen Rory McIlroy and Graeme McDowell who both won the US Open.

The 42-year-old Briton made a three straight scores in the 60s and a par 70 in the final round that lifted him to a comfortable three-stroke victory over Americans Dustin Johnson and Phil Mickelson.

Clarke, playing in the British Open for the 20th time and 54th major, broke the record for most appearances in the championship before securing a debut win. 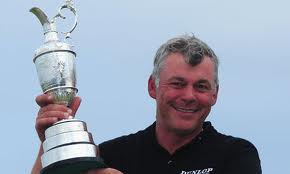