Reports of infidelity by Ashton Kutcher has troubled his marriage to Demi Moore, 15 years his senior.

Ashton Kutcher, 33, who recently took over Charlie Sheen’s role in hit US TV series Two And A Half Men, was seen partying at a club with Miss Sara Leal, 23, on his wedding anniversary this week.

The alleged encounter happened on the 12th floor of the Hard Rock Hotel in San Diego, California, in the early hours of Saturday, the Hollywood couple’s sixth wedding anniversary.

Kutcher’s bodyguard was also said to have taken Miss Leal’s mobile phone before she entered the hotel room.

It is the second time in a year that Kutcher, 33, has been accused of cheating on 48 year old Ms. Moore.

Ms. Moore was tweeting from the East Coast, where she is temporarily based. She shared a quote from Greek philosopher Epictetus on September 23, writing: “When we are offended at any man’s fault, turn to yourself and study your own failings. Then you will forget your anger.”

Kutcher brushed off the accusations, posting on Twitter: “I think Star magazine calling me a “cheater” qualifies as defamation of character. I hope my lawyer agrees.”

He added: “Star magazine, you don’t get to stand behind “freedom of the press” when you are writing fiction.” Kutcher’s spokesman also denied the allegation while Miss Moore tweeted ‘Excellent point my love!” 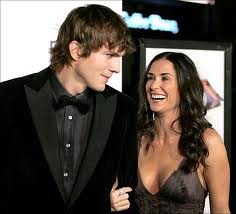