Mining companies began prospecting for gold in Lomboc, Indonesia, in the late 1990s.

Gold has long been mined in other corners of Indonesia, which is one of the world’s top producers of the metal.

But it was only about three years ago, after gold prices rose sharply in late 2007 and early 2008, that the illegal gold rush began here.

In impoverished corners of Lombok like Sekotong, the discovery of even a few grams of gold has allowed families to replace their thatched huts with houses made of concrete.

But with little experience in mining and with few adequate tools, hundreds are believed to have died digging in illegal mines.

The authorities also worry about the long term consequences, as the gold seekers use mercury to extract the precious metal and release the residue into the environment.

Women with 23 kilogram sacks of rocks on their heads clambered down the path, carrying the loads to a nearby village where they would be crushed by hand or by machine, and mixed with water and mercury, in a search for a specks of gold.

At the mine, discovered about a week earlier, scores of men were crouching on a steep incline, each digging just below the surface and filling their sacks with stones.

Under a tarpaulin, a dozen men were taking turns digging deep into the rock. At one spot, a man squatted a meter and a half down a pit, holding a chisel with his gloved left hand and a mallet with a bare right hand.

A giant boulder was balanced precariously over the pit, held up by two sawed off branches. They put those branches there to prevent the pit from collapsing, according to Mr. Jumah, a former farmer with his smiling face glistening with sweat.

Like many Indonesians who sport only one name, Jumah, 45, was one of the countless men seeking their fortune in the gold rush that has swept this part of eastern Indonesia.

With gold prices hovering near record high prices, illegal gold mines began flourishing here three years ago on the island of Lombok, better known to outsiders as a tourist destination.

The authorities had tried many times to shut down the illegal operations, which reopen as soon as the police leave an area, Mr. Ispan said. That is why it was impossible to determine how many people have died in collapsing mines and rock slides, he added. Fearing that their mines could be closed, diggers do not report deaths.

With the gold rush, competition was getting fiercer and drawing newcomers everyday. Unlucky streaks could bankrupt diggers and there was always the risk of never making it out of a pit. 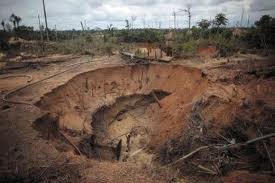 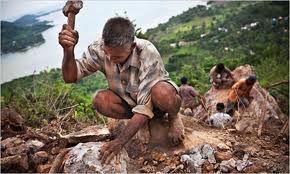