As of March, in this hilly megalopolis in south central China, modest burial sites are in. Fancy tombs are out. And in some places, so are fancy funerals.

After a quarter of century in which the gap between rich and poor has steadily widened, the wretched excesses of the affluent are increasingly a Chinese government concern.

Income inequality and its growing disparity are among of China’s biggest economic problems, according to World Bank’s chief economist Justin Yifu Lin.

Ever since Deng Xiaoping introduced economic reforms of capitalism and free enterprise to China in 1978, that it was fine to get rich, much of China has seemed hell bent on that goal. But some local governments would like those who succeed not to lord it over others, at least when it comes to paying final respects.

Plots for ashes are limited to 1.5 square meters. Tombstones are supposed to be no higher than 100 centimeters, although it is not clear that limit will be enforced. Sellers of oversize plots have been warned of severe fines, as much as 300 times the plot’s price.

In March in Wenling, a coastal city south of Shanghai, five brothers were fined US$ 450 dollars for violating the city’s regulation against funeral ‘extravagance and waste’ after they commandeered the grounds of a high school to bid their mother goodbye with pomp befitting a state funeral.

As thousands of onlookers watched a ceremony that featured nine flower decked limousines, a uniformed band and a 16 gun salute. The high school principal, the assistant principal and the government’s head of funeral practices were all fired.

Chen Changwen, director of the sociology department at Sichuan University, said ostentatious tombs are particularly irksome because many Chinese find even a simple grave marker beyond their means.

Ordinary people who walk by and see these lavish tombs might not be able to keep their emotions in balance, according to Zheng Wenzhong, as he visited the relatively modest resting place of a relative at The Temple of the Lighted Lamp Cemetery.

Yang Bin, 48, who earns roughly US$ 150 dollars a month chiseling tombstones at Zhenwu Shan cemetery, quietly criticized the excesses of ‘capitalists’ who ‘are everywhere now’.

Most Chengdu mourners interviewed expressed skepticism about the tomb limits. At Temple of the Lighted Lamp cemetery, Kuang Lan, 42, said: “My personal opinion is if you have the money to make a bigger tomb, make a bigger one. If not, make a smaller one.” 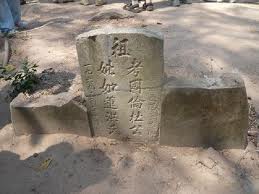