World no.1 and defending champion Novak Djokovic was defeated by fellow countryman Janko Tipsarevic 7-6 (7-2), 6-3 and blamed the blue clay court as he was ousted of the Madrid Open.

Earlier, Rafael Nadal lost to compatriot Fernando Verdasco for the same complaint. Both players vowed to skip the tournament next year if the real clay court is not restored.

Djokovic has been frustrated by the slippery blue courts all week along with second seed Rafael Nadal.

The top seed was also critical of the ATP and says players must be consulted in future before new initiatives are introduced.

“I want to perform my best but, if I cannot move and am putting pressure all the time on muscles and my body, and I am worried about not getting injured because the court is unpredictable, then what is the sense in playing here?”

The third seed Federer, has also expressed his opposition to the blue clay but the Swiss virtuoso has adapted to the conditions more effectively than the top two players and trounced instead in the tournament Spain’s David Ferrer 6-4, 6-4 his 13th win in their 13 meetings.

“I want to congratulate Janko for playing a great match today,” Djokovic said. “He’s been playing great, no question about it.”

The sixth seed Berdych will be facing Juan Martin Del Potro of Argentina in the semi-finals. 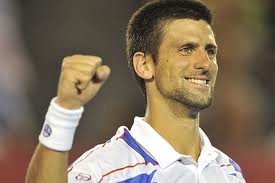