Zach Johnson carded a six under 66 in the second round to tie for the lead with Matt Kuchar and Kevin Na at Players Championship in Florida.

One shot behind was PGA TOUR rookie Harris English, who birdied the 17th and 18th for a 67 while Martin Laird, Brian Davis, Jonathan Byrd, Charlie Wi and Adam Scott were tied on six under.

Tiger Woods who fired an over two 74 in the first round was in danger of making his second straight cut until he made four straight birdies on his way to a 68 in the second round. He was six shots behind.

Rory McIlroy, the world’s No. 1, has failed to make the cut after he carded a 76 in the second round and that gave Lee Westwood and Luke Donald the opportunity to become World Number One.

McIlroy was unhappy with his efforts, yet set his sights on the big tournaments to come – notably the BMW PGA Championship at the Wentworth Club.

“There’s something about this course I can’t quite get to grips with,” said the Northern Irishman. “It’s disappointing, I’m not going to lie”.

The Players Championship Leaderboard (Second Round): 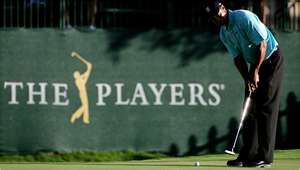