In a study published in August in the journal Arthritis Care and Research found that among 455 patients with painful knee arthritis, they underwent an acupuncture treatment in which thin needles are inserted into the skin at specific points on the body.

In the real world, an acupuncturist would customize the treatment to a patient’s symptoms. Rather than proving that acupuncture does not work, the study may suggest that it works even when administered poorly.

But the real lesson, acupuncture supporters say, is how difficult it can be to apply western standards to an ancient healing art. The research and other acupuncture studies have fueled speculation that a prick of a needle can influence the way the body processes and transmits pain signals.

In a 2007 study of 1200 back pain patients, it has shown that about half of the patients or 50 percent had less pain after treatment compared with only 27 percent of those receiving traditional back cure.

The researchers speculated that inserting needles may have caused a “super placebo” effect, touching off a series of reactions that changed the way the body experienced pain.

In a 2004 study by the National Institute of Health found that acupuncture significantly reduced pain and improved function in knee arthritis patients compared to routine knee care.

The results were striking. Acupuncture relieved hot flashes just as well as Effexor with fewer side effects. However, “There are some things you can’t study the same way we do with drugs,” said Dr. Eleanor Walker, director of breast radiation oncology at the Henry Ford Health System.

“The thing that can’t be argued in my study is the duration of the effect. It lasts, and the placebo effect doesn’t last once you stop a treatment.” But acupuncture believers say it doesn’t really matter whether studies find that the treatment has a strong placebo effect.

After all, the goal is to harness the body’s power to heal itself, whether that power is stimulated and effected by placebo or by skillful placement of needles. 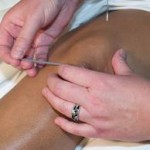